Balloons make for really fun and colorful party decorations! In preparation for Cinco de Mayo, I decided to create this papel picado inspired banner hung from balloons. I skipped the traditional colors in favor of pretty pinks making this the perfect way to decorate for a girl’s night in Cinco de Mayo party. Sometimes drinking margaritas with your girlfriends is the only way to go. But using balloons for decorations can be tricky. Read on to find out how to use balloons to hang your papel picado or other party signs! I’m always on the look out for cool balloons. I like to find the ones that have great sayings on them or that come in a fantastic color. Often you don’t find these things altogether. So when you see a great package of balloons I encourage you to pick it up and save it. Between these awesome ‘fiesta like there’s no tomorrow’ balloons from The Flair Exchange and the pretty coral balloons I picked up at Walmart, I knew I needed to do a mix of pinks. And although I knew that I wanted my focal point to be the papel picado inspired banner, I decided to whip up a few simple yarn tassels in coordinating colors as well. A party decoration can never have too much flair… I had two signs in mind for this party. I found these great white doilies from Target’s dollar section and knew that they would look like papel picado if I hung it from a string. I also knew they would be light, which is key when you are hanging something from balloons. But every time I saw the ‘fiesta’ balloons it made me sing ‘fiesta, foreva’ in my head. Because, Lionel Richie. So I quickly made the second sign but wasn’t sure it would be light enough to hang from the balloons. You can find ready-made papel picado banners at your local party store, you can use something that resembles it like I did, or you can make your own! There are a bunch of tutorials online for that. I suggest using tissue paper, if you make them yourself, as it will be the lightest weight material you can use. I also knew that I wanted to use just one string for all the balloons on each side. This ensured they would float at different heights and provide more helium for the sign to hang from. I blew up each balloon and added it with a simple knot to the string. I also added a tassel under each balloon for extra color. I created each balloon bunch separately and then hung the banner. I tied one side of the banner to a knot of one of the balloons. The four balloons held it up pretty nicely. I knew there was a chance that I may have to add more balloons to support the weight but although it ended up pulling the bunches towards the center a little bit, each side was fine with just four balloons. With the banner hung, it was time to add the second sign. I initially thought I might hang it from another area on the balloon bunches but that was too much for these poor little balloons to hold. So tape on the wall worked too. 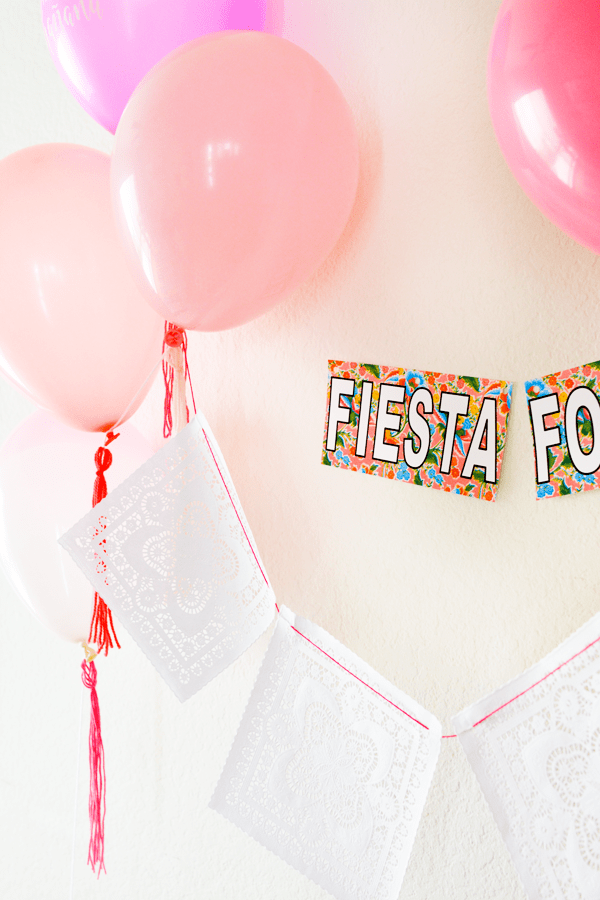 These doilies were fairly light so it wasn’t a crazy idea to try to hang them from the balloons. The card stock, on the other hand, was a little too much. Also, although each yarn tassel doesn’t weigh that much, there were four on a string which contributed to the overall weight a tad. When you are considering hanging something from balloons, whether it is a single balloon or several, you have to keep the overall weight in mind. The balloons also tend to lose their helium sooner, when something is hanging off of it. I left this decoration up for the rest of the day after I took these photos and by the evening, it was floating near the floor. A balloon on its own, will usually last until the next day. So just take care if you are going to party hard and want to keep your decorations up for hours. The party may out last the balloons. How stinking cute is this balloon?! This would have been perfect for my ‘chicks and salsa‘ themed girl’s night I threw a few years ago. And, by the way, tequila bottles make great balloon weights. Just make sure you have a bottle free for shots, if that’s what you’re in to…or at the very least, make your margaritas before you decorate with your balloons. Balloon Time makes it super easy to decorate with balloons. And I love decorating with balloons! And tequila. Kidding. That doesn’t usually happen. Usually. You should totally make this papel picado inspired balloon banner this year! Wishing you all a happy Cinco de Mayo!

This post was sponsored by Balloon Time Helium Tanks. Thank you for supporting brands, like Balloon Time, that let me create fun stuff and share it with you!

This DIY balloon party sign is super simple to make!

Topping your cake with a balloon is adorable!