My oldest was in a BIG Lego phase when he was turning 6 years old. But he also really loved music. When it came time to plan his birthday party, we knew it had to be super fun and include both of his favorite things. We came up with the Kid’s Dance Club and Lego Birthday Party and it turned out to be the best party theme ever! Here are all the tips and ideas we used for decorations, food, and activities to throw the best Lego party ever thrown. I only share things I love and think you’ll like too. This post contains affiliate links, which means if you purchase through one of these links, I am compensated. I originally shared this post in August of 2012 but loved it so much I updated it with even more information!

A Fun Lego Party Theme with Dancing Too

This is one of my favorite kid’s parties I’ve ever thrown, and I’ve had some pretty fun ones (the glam rock inspired space party? Also pretty fantastic). What do you do when your kid is beyond obsessed with Legos AND dancing? Duh, you throw a Lego Dance Party. It was SO much fun. And turning part of your backyard into a kid’s dance club is super awesome. Everyone should do that at least one time in their lives!

This Lego themed party with dancing was fun for both kids and adults. Sometimes it’s hard to bridge that gap but music is a great way to get people involved. I knew that I wanted some of these dance diagram posters for the “club” as decorations. Had I had more time, I would have updated the dances to “the running man” etc., but I just used images I already found online. I mean, aside from Dancing with the Stars who really does the rhumba?

You can print blueprint sized images at Kinko’s Fed Ex very inexpensively. Color are more expensive but this is where I always go when I want to print something large for a birthday party. (See also my fun birthday card poster idea!) I also knew I wanted some of these posters to be Lego themed. So I reached out to Steph and told her my idea. She got it exactly! How fun are these! And lucky for you, she is offering them as a download on her site! They would make great art for a kid’s room!

I love to create fun party garlands so for this one, I used big, colorful rubber bands and knotted them together. Then I printed and cut out Lego heads and taped them on. And of course, what’s a kid’s dance club without disco balls?! I ordered a bunch of mini ones to put all around.

Here is the birthday boy on the dance floor. Nevermind the overgrown rosemary bush that also wanted to attend the party…To make the “club”, I bought $3 sheets from Ikea and ironed on large Lego brick images to some of the panels. I stapled them to the patio pillars and the club was complete. So easy and made a huge impact on the kids!

Of course, this worked out really well because we have such a small backyard, but you could rig something up with string for a larger area. Lego heads. Everywhere. Yes, this cost printer ink and paper. And of course, time to cut them out (I outsourced to the grandmothers).

Activities for the Lego Dance Party

I found the striped fabric also at Ikea and I think the colors were super fun, a bit 80’s but still totally modern and used it throughout the entire party. At this table, we invited the kids to build a Lego building to enter into our contest. I don’t love to have a bunch of games at kid’s parties but I do like to have activities that they can do on their time to keep them busy.

And of course, kids want to play with Legos.

There were a few smaller kids at the party also so I wanted to make sure they had something to keep them entertained also. I found these awesome dancing color pages from Anorak Magazine a few years ago and modified them to include Legos also so it fit the theme perfectly.

And of course, no dance party is complete without dancing games like freeze and dance offs.

The food table is always a fun place to add decoration and really round out the party theme. The tubes that you can see haning from pink and orange ribbon were filled with large silver glitter and spray painted Legos to match the party colors. I found those cool Lego block letters online and turned them into a quick banner and hung it from a black chain.

I really didn’t want to do one of those parties where every single thing had Legos in it. Instead, I had my dad make some Lego inspired wooden flowers, I made a few Lego containers to hold suckers and my mother in law bought a few Minifigures that were also dance related. I like to do my parties in the afternoon and while I don’t feel like I need to serve a whole meal, I like to serve a heavy snack. I decided to do a make your own pasta bar so that people could eat as much or as little as they wanted.  I made sure to provide sweet and savory options and these could be made as healthy or as delicious as guests wanted them. A Lego party must have Lego shaped food. I kept it simple with easy chocolate Legos that I just made in a shaped mold.

My mother-in-law went the extra mile and made Lego gummies.

In addition, we also had cereal necklaces. How rad is that wood stand my dad made for me!  I can’t wait to use it again! For drinks, we had a muddle your own lemonade bar. And also delicious Passion Fruit Sangria. Because,  YUM. 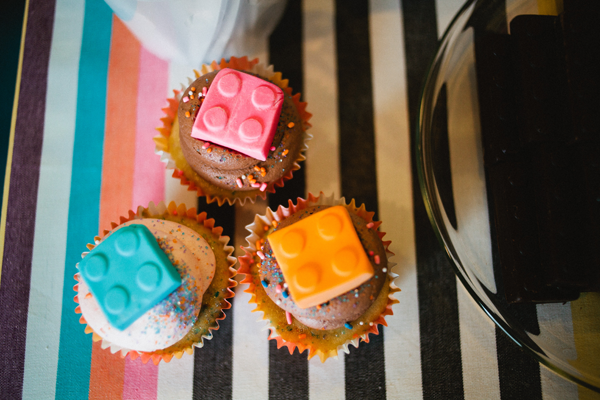 And it isn’t a party unless there are cupcakes. My son loves the allergen-friendly cupcakes from Meringue Bake Shop! Plus we had multiple kids at the party with food allergies so I was so glad that they could all eat them!

We can’t get enough of Meringue Bake Shop’s pinata cakes so, of course, we had to have that too. The day was sooooo hot and the allergen-friendly chocolate didn’t hold up the same way as previous cakes. You can see that the chocolate looks a little droopy in these photos. Lesson learned. This is our 4th pinata cake. It was quite obvious that most of the kids knew what to expect. They attacked that cake like I have never seen. And of course, all the parents who had no idea what was going on, were mortified. It was pure cake chaos. And I loved every minute of it.

And then things started to get going on the dance floor. I decided that if the kids had some Flutter Fetti they might get into the dance club spirit. I was right. It was also a pretty easy way to add color to an otherwise plain space. And clean up was not as bad as you might expect. How amazing are these photos by Dez and Tam!! We had a dance contest. The birthday boy and two fun-loving adults got to be the judges. We played three songs (which looking back could have probably only been 1 but these kids love to dance) and then declared a winner. The winner got a CD of some of my son’s favorite dance music. This birthday party was SO fun! There were so many fun little Lego details around the party. And the dancing and music was such a fun vibe.

These Lego heart necklaces were the favor that I gave the little girls who came to the party. My mother in law helped me put all of these together. The little boys were sent home with crayons shaped like Lego bricks and Minifigures and some Lego coloring pages.

The Lego Present of His Dreams

And then it was present opening time. Since it was a Lego themed party, rest assured he got about a trillion Lego sets and somehow we only got 1 duplicate. But we had a BIG surprise for him. He had been talking about the Lego Death Star set for a while and one of our friends suggested that everyone coming to the party could pitch in for it if they wanted to.

After all of the other presents had been opened, his dad brought out a very large box. I’m pretty sure he knew immediately what it was. He’s smart like that. Look at that pure joy!!! I loved watching this unfold! He declared it the best day of his life. He stood on a chair and thanked everyone profusely and then asked to open it. Thank goodness the party was starting to wind down. There was a lot of fun had in this dance club.  Check out those big round awesome lights we had!  My husband’s friend owns a staging and lighting company and he let us borrow them for the party. They changed color and totally made it seem more club-like.

All but the last photo were taken by Dez and Tam. They just seriously continue to blow my mind in every way. These are photos my and family and I will cherish forever. If you’ve never thought about having a photographer at your kid’s parties, you really should.

Your photos don’t have to only be focused on party decor and details. A lot of what you don’t end up seeing is the amazing guest photos that are taken. Most parties have tons of family so it is a great way to get really good, recent photos of everyone. And to see the kids interact is amazing. You should definitely contact Dez and Tam before your next party!!

Shop for Your Lego Themed Party

On a personal note:

I was working on this post when I found out that my grandmother passed. I was very upset and when I pulled myself together and came back into the room, I noticed my son sitting at the computer typing away. I freaked out because I had been uploading all these photos for what seemed like hours. And they appeared to be all gone. Later, when I was a little more in control of my feelings, I decided to log back in to see how much work I would have to redo and this is what I found…

I love you to the moon and back

Written by my sweet little 6-year-old who knew I was hurting and wanted me to know that I was loved. So, of course, I had to leave it because it was the sweetest thing ever. And a memory that I will always cherish and never take out of this post.

I’m hoping we get to have another Kid’s Dance Club and Lego Birthday Party in the future. I feel like our backyard needs to be turned in to a club again.