Sometimes you just want some cool Halloween vibes, you know? But I don’t love all the dumb themed songs. I created this Halloween playlist full of indie rock vibes to listen to while we carve pumpkins. But it also works for other parts of the year when you just want to be a little moody. 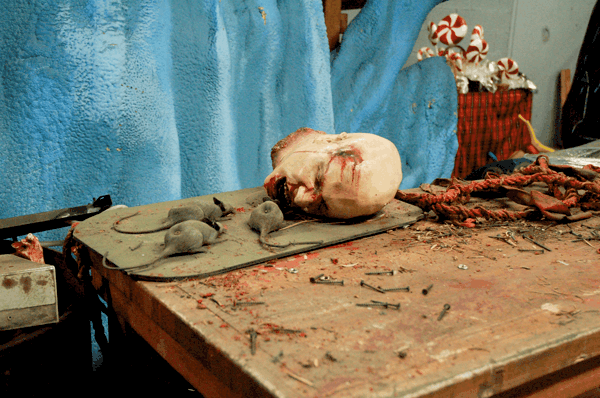 I have to say that Halloween is not my favorite holiday. I actually really hate how gross everything is. This year when we went to pick out the kid’s Halloween costumes, we stood at Party City for an hour staring at the costume wall. Either the costumes were totally dumb or they were super gory.

I’m just not going to have my 5-year-old walking around the neighborhood in something with fake blood splatters.

I also don’t love the overtly themed Halloween songs they play every year. Sure, you have to hear Monster Mash at least once, but I’d rather listen to something with Halloween vibes, that is still good music.

Here are some of my favorite indie songs that I made into a Halloween playlist for your listening pleasure. It’s a little moody and melancholy with a few goth influences. But your ears will still like it. I’m sure of it.

I know I said I don’t love Halloween and then I go and put up a gross picture of some guy’s head trying to eat rats. In my defense, it was the only image that made sense to go with a Halloween music playlist. It’s from my photo walk at Knott’s Berry Farm when I got to go in their prop warehouse and found some of their Halloween Haunt decorations.

I’ve never been to Halloween Haunt. I’m too much of a scaredy cat. So at least now I can say I’ve seen some of the decorations! My husband threatens to surprise me on a date night there sometime. That would NOT end well!

Pop over to Spotify to follow this Halloween Playlist! Moody vibes. All over the place.

You may also enjoy music that isn’t Halloween related:

Songs to Clean To

Yacht Rock. You know you love it.